I wasn’t supposed to go on summer holidays that year. But when one of my dive buddies told me he found good deals on return flights for the end of July, in the middle of the peak season, 1 hour and 200€ less on my bank account later, I had booked a 10-day diving trip to Malta. I had visited the Mediterranean island country once before with my family years ago. I kept sweet memories from this trip, between megalithic temples and finely decorated fishermen boats. What I didn’t know at that time was Malta was slowly building a name for itself as the number 1 scuba diving destination in Europe. With many shipwrecks all around Malta and the famous Gozo Blue Hole, it didn’t take long to convince me that it was worth going back. Most dive sites starting from the shore in warm and clear water, diving Malta is also an excellent choice if you are still a beginner or if you are considering passing your Open Water certification.

The best dive sites in Malta

The best historical shipwrecks to dive in Malta

The strategic position of Malta in the Mediterranean Sea, only 90 km south of Sicily, and 300 km east of Tunisia and 340 km north of Libya, led to heavy ship traffic since early ages. While Malta remained neutral during WWI, the island held a vital role in the second world war. Hence many of Malta’s historic shipwrecks are related to this period of modern history.

Amongst the 18 main wreck diving sites all around the island, 6 are historic shipwrecks, and 2 of these are only accessible to technical divers due to the depth (below 60m). If wreck diving and history are your things, you should dive these incredible shipwrecks:

The best artificial shipwrecks to dive in Malta

As the tourism authority of Malta had a strategy in mind to scuttle ships for scuba diving tourism as early as in the 1970s, today, Malta is a wreck diving paradise in Europe that caters for all levels of divers including the beginners. With shipwrecks all around the island, it allows diving any day of the year as there is always one shore that is protected from the winds.

Amongst the shipwrecks sunk on purpose for dive tourism, some make exceptional dives. Here is my selection of dive sites not to be missed with incredible underwater photography opportunities:

I had the chance to dive the UM El Faroud with Maltaqua while enjoying the incredible landscapes of the Blue Grotto and Filfla Island on the horizon. We left Saint Paul’s Bay at 8.30am. After a beautiful drive across the olive tree fields and the vineyards divided by low stone walls, passing by the medieval town of Mdina standing fiercely on its hill and a breathtaking arrival at Blue Grotto via a steep road, we were ready to gear up at 9 am.

There is a bit of swim to reach the UM El Faroud (about 10 minutes), so make sure to control your air consumption and fin kick efficiently, as this is a deep dive. The dive usually starts with a quick look at the giant propeller at a maximum depth of 34 m. We then slowly ascended along the hull of the ship where you can see its nameplate. After a tour around the part where the ship broke into two after a massive storm in 2005, we did a bit of exploration inside. The shipwreck is safe to penetrate with its large pathways. Even decommissioned to be safe for scuba divers, there are still a few interesting mechanical and electric parts to see. We ascended along with the enormous chimney where we could see the logo of the company.

It is worth planning several dives on the UM El Faroud due to its size and many exciting areas to explore. Because of its depth, you need to be careful to allow sufficient surface interval between dives or return on different days. Nitrox is a good idea on this dive site, to get a bit extra bottom time.

The dives sites in Gozo

If you are visiting Malta for scuba diving, do not miss the opportunity to also go diving in Gozo, the sister island of Malta. It is reachable in only 15 minutes with the ferry from Cirkewwa :

What type of marine life can you see in Malta?

If you are a fan of marine life while scuba diving, I need to admit this is not the main strength of the Maltese dive sites. If the Tourism board developed a program of artificial shipwrecks, it was undoubtedly because they were well aware of this issue but wanted to make the most of bright and warm waters of Malta.

This being said, saying there is nothing to see from a marine fauna point of view in Malta would be wrong. The artificial wrecks in the island of Malta are home of many colourful flabellina nudibranchs. The number of fireworms was also quite unbelievable. But be careful, they may be pretty, but they sting! From fish species point of view, I mostly noticed schools of two-banded seabreams, small scorpionfish and a couple of moray eels which are common in the Mediterranean Sea. So nothing exciting but not empty either as I often hear about Malta.

When is the best season to go diving in Malta?

The scuba diving season in Malta used to be from March to November only. While some dive centres close for the winter season, several dive centres remain open all year long. With an average water temperature of 18°C, you can dive in Malta in a wetsuit anytime. Even in the winter with stronger winds, thanks to its numerous shore dive sites located all around the island, scuba divers can find a sheltered spot every day.

I dived in Malta end of July, but that year water temperature was colder than usual with a temperature at 20 m around 19/20°C. I was wearing a 5 mm full wetsuit with a hood and gloves with a Ceramiqskin warm undersuit below. Usually, in the summertime, water temperatures are 24/25°C.

Looking for the warmest water and the best visibility while enjoying lower prices? September is the best period to go diving in Malta. Water has heated up all summer, and you can dive without the crowds.

If you are interested in learning about Malta’s history while going scuba diving, which dive centre can be better than one of the oldest ones in Malta? Maltaqua has been in business since 1975 and is owned by a Maltese family. Their instructors have a long experience of diving in Malta. My dive guide for the day, David, a British instructor, had been living in Malta for 10 years. I was amazed at all the stories he told me about Malta’s history on our way to the Blue Grotto. I think he showed me details no other visitor would notice.

Maltaqua has a large dive shop with the fanciest compressor room I’ve ever seen! They can cater for recreational divers and technical divers as they can prepare your Nitrox tank on demand. Something that also caught my attention was their independent diver package. Once you know your way around, both on the road and underwater, they offer tanks with unlimited refills so you can dive as much as you want all-around Malta with your own rental car. On top of this, they are just sweethearts: I got a severe issue with my camera before my dives with them, and they did all they could to help me. Big thumbs up!

I tried another dive centre during my wreck diving specialty training, Aquatica, and I used the services of Saint Andrew Cove Divers when diving in Gozo.

What to do in the Maltese Islands?

With 7,000 years of history from the Phoenicians followed by the Romans, the Arabs, the Norman who established the Knights of St John’s Order, the French shortly before joining the British Empire to its independence in 1964 and its entrance into the European Union in 2004, expect to be blown away by the density of historical wealth of the Maltese Archipelago. Malta is the home of Megalithic temples as old as 3,800 BC and its capital city, Valletta, is a UNESCO World Heritage Site.

One thing that I found fantastic in Malta was that every dive site could be associated with one of the historical or natural highlights of the country. In only 10 days, I could explore most of it while getting an excellent glimpse of the quality of diving around Malta, Gozo and Comino. If you add that Malta ranks amongst the countries with the best climate in the world, with more than 3,000 hours of sunshine per year, you have the perfect holiday setting for any scuba diving enthusiast.

Here are my top sightseeing sites that you can enjoy while going on a scuba diving tour around the Maltese Islands:

Where to stay in Malta?

Malta’s main island is only 27 km by 14.5 km, as the dive sites are mostly shore diving, your dive centre will always take you with a minibus to the dive site. As a result, you can virtually stay anywhere in Malta. Nevertheless, I found that during my stay in July, traffic could be quite heavy, so it was a good idea to be at a strategic location based on my program.

Best place to stay in Valletta

I only spent a weekend in Valletta at my arrival on Malta, and I was in the mood for chilled out evenings with a glass of wine. Most hotels and Airbnb rooms can be pricey, so I decided to stay at Sea-Esta Hostel, which is a clean and stylish hostel. It was quiet as there isn’t any large common area to hang around (party people not your kind of place). If you are on the budget, diving in Malta being shore diving and dive centres driving you all around the island, you can decide to make it your base for your scuba diving holiday.

Everything pointed out Saint Paul’s Bay as the perfect place, geographically speaking, to do everything I wanted to do without spending hours in traffic: proximity to the ferry terminal for Gozo and the direct departure for Comino Blue Lagoon’s cruises. This is how I rented a holiday rental flat in Buggiba.  What I didn’t understand at first is that Saint Paul’s Bay area is made of 3 continuous towns: Saint Paul’s Bay Village, Buggiba and Qwara. Unfortunately, it is fair to say Buggiba was the ugliest area.

Paul’s Bay Village was the most charming and authentic with many local food shops, bakeries, fishmongers. This is where you find most of the best scuba diving centres in Malta. Don’t hesitate to ask Maltaqua for their holiday rentals for scuba divers. On the opposite side of the bay, Qwara is the place where you find luxury holiday apartments and beautiful resorts like The Dolmen Hotel, where I stayed with my family on my first trip to Malta. Since then, it has been fully renovated (yes, I sneaked inside to check it out!) into a stylish design hotel.

Best place to stay in Gozo

I only went to Gozo on day trips, so I didn’t sleep on the sister island of Malta. However, the next time I’m diving in Malta, I will stay on Gozo near Xlendi for a full week and stay in a cosy farmhouse like this one with some friends. 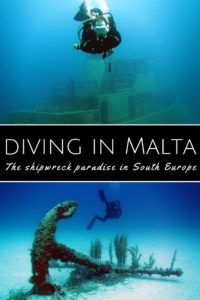 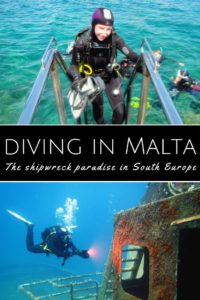