How to visit Yonaguni Island as a scuba diver and not exploring the world-famous underwater Yonaguni Monument?

On a mission to observe the hammerhead sharks migrating near Yonaguni Island, I got a single opportunity to finally see the mysterious Yonaguni monument. In the middle of the winters when the winds and currents are the strongest, I went scuba diving in a site which had been on my bucket list for years.

I do not hold any PhD in geology or archaeology, and I am just an enthusiastic diver who equally loves history and natural sciences. I wanted to do my best at clarifying all the questions you may have about the Yonaguni Monument based on what I saw in person, heard from people of Yonaguni and read from authoritative sources.

Where is the Yonaguni monument? Tategami Rock, also on the south shore of the island like the Yonaguni underwater monument

It is quite interesting to note that every time I mentioned I scuba dived in Okinawa, most people asked me about Yonaguni Monument thinking it was near the main island of the prefecture, Okinawa Honto. The Okinawa Prefecture and Archipelago, also called the Ryukyu Islands, stretched over 1000 km from the south of Kyushu Island to Taiwan. The Island of Yonaguni is the westernmost island of Japan, only 111km from the east shore of Taiwan and more than 2,000 km away from Tokyo.

Luckily the island is well connected by 3 flights a day from Naha and Ishigaki, and also a ferry twice a week from Ishigaki. The island isn’t big, and you can make the entire tour by car in less than 2 hours, which I recommend doing as the island has a beautiful green wilderness and spectacular craggy seashores where the adorable Yonaguni horses (actually poneys) stroll around freely.

You can read all my tips about what to do and where to stay and to eat in my next article about diving with hammerhead sharks in Yonaguni.

The dive site of Yonaguni Monument is about 100 m offshore from Arakawa-bana Cape. It is on the south coast of Yonaguni Island, half-way between Tategami Rock and Higawa settlement. Scuba diving boats leave from Irizaki harbour, nicknamed “Shark Dock” in Kubura on the western tip of the island. It takes approximatively 20 minutes by boat to approach the dive site from there.

Who discovered the Yonaguni Monument?

Kihachiro Aratake found the Yonaguni monument in 1986. In the 1980s, Yonaguni was already a popular scuba diving destination for Japanese divers to see schooling hammerhead sharks. His scuba diving centre, Sou Wes, is based in Sonai, on the north shore. It is now managed by his son, Shotaro, who delivered to our dive team one of the best dive briefings I have ever listened to.

It’s on a mission to find new hammerhead shark-watching points that Kihachiro Aratake made the incredible discovery of a strange looking underwater monolith. He nicknamed it the underwater Machu Picchu, but the dive site is now known in Japanese as “Kaitei Iseki” (the monument on the bottom of the sea). The discovery immediately sparked a debate as to whether it formed naturally or if it was a man-made structure created by an ancient civilisation. 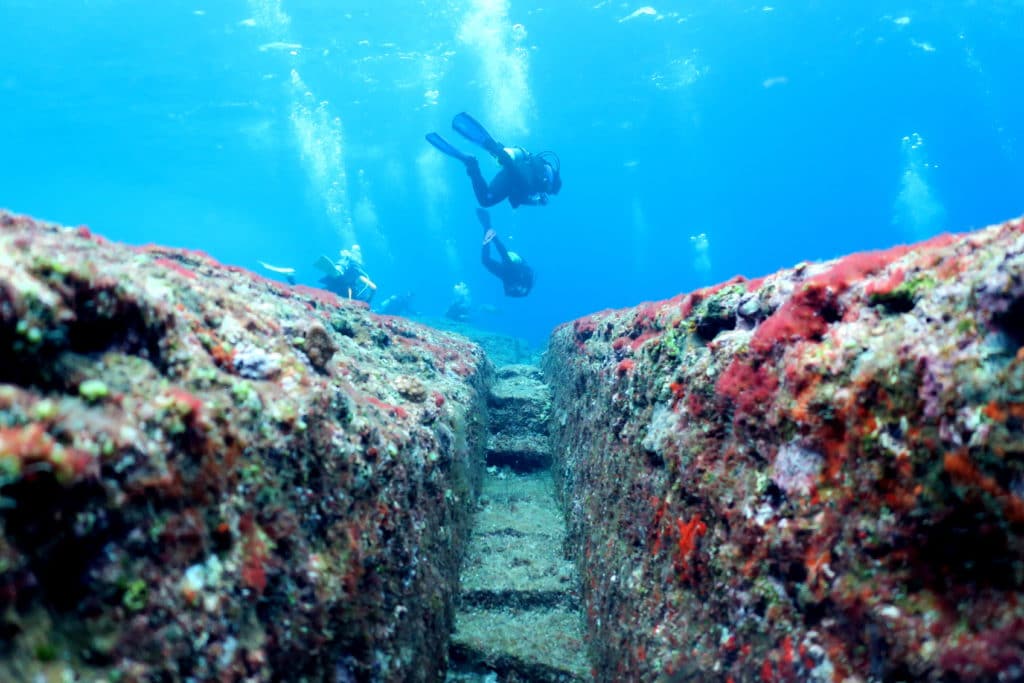 Man-made pyramid or natural formation sculpted by the sea?

Geological wonder or proof of the existence of the lost continent of Mu, the Atlantis of the Pacific?

The number of theories about the Yonaguni Monument is endless on the internet, with a special mention to all the videos you can find on YouTube.

Masaaki Kimura is a professor of marine geology and seismology at the University of the Ryukus in Naha. He led extensive surveys and research about the Yonaguni Monument since the 1990s and published several articles about it from 2001.

According to him, the Yonaguni monument is a monolithic structure made of layers of sandstone and mudstone. The central pyramid-like monolith is 290 m by 120 m and 26 m of height. Its appearance and size are said to have many similarities with Shuri Castle in Naha, Okinawa main island. The 14th-century palace of the kings of the Ryukyu Kingdom is about 400 m by 270 m (reconstructed in 1992 after being destroyed during WWII, I visited it on my first trip to Okinawa).

Kimura’s team found what they believe to be stone tools and artefacts that would have been used for farming according to specialists. There are also tablets where they would have found engraved symbols and figures of animals. But the nearly vertical walls from 25m to almost the surface of the sea are the most baffling. The report says a natural explanation would require that the same force would have been equally applied all along, but the distribution of natural forces dramatically varies from the depths to the surface. They checked at the bottom for rocks which would have fallen from natural erosion, but they found nothing. They also found evidence including a drainage system, a loop road, a retaining wall, a drinking water pool, holes for pillars, a carved face which would look like a Moai of Easter Island and a flat, sharp carved rock looking like a turtle seeing from above. 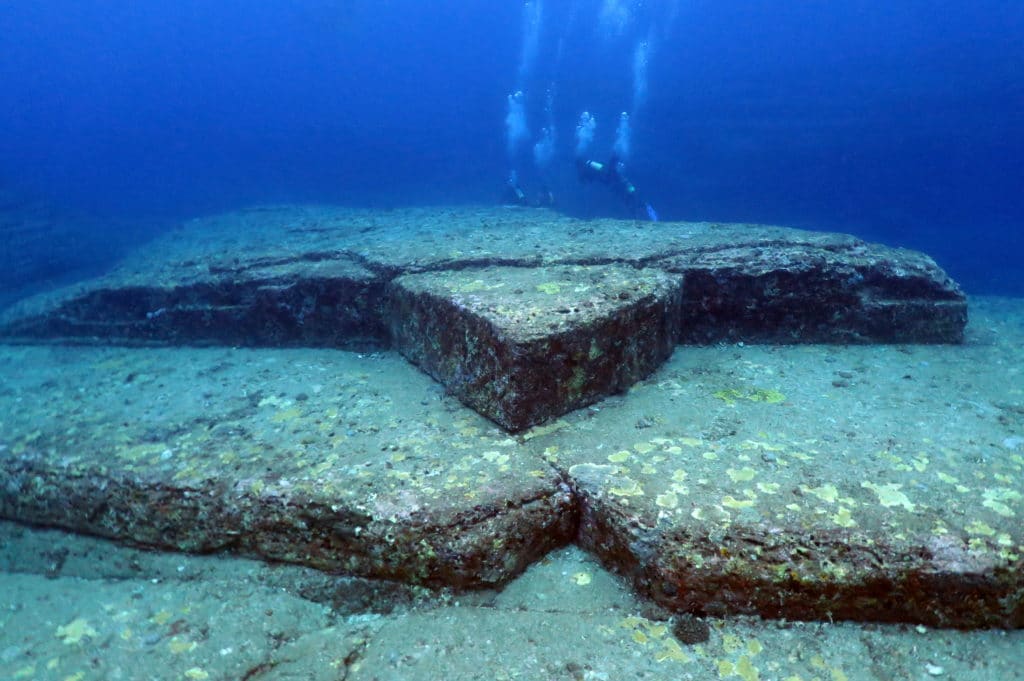 The turtle statue at the end of my dive

Before the last Ice Age meltdown, there would have been a land bridge connecting China mainland, Taiwan and the Ryukyu Islands, the period would go from 200,000 to 15,000 years ago. The carbon-14 and beryllium-10 dating of samples of coral attached to the structure indicated an average age of 2,000 to 3,000 years old. Professor Kimura deducted that Yonaguni monument must be 10,000 years old. But in a new study in 2003, a Beryllium-10 dating survey made Professor Kimura concludes that the sites must be between 2,000 to 3,000 years old. Here I must admit I got lost.

Anyway, what I surely understood is that the uncertainty of dating Yonaguni monument led to many extravagant theories to flourish. Based on the first hypothesis of 10,000 years old, many argued that it is just impossible for primitive people living in caves to build such a massive monument.

To give you a point of reference, if 2560 BC is its actual completion date, the Great Pyramid would be more than 4500 years old. It had a total height of 147m (139 m today) and measures at its base 230 m by 230m with a mass of 5,9 millions of tons of stone. There are also some suspicious theories about the pyramids of Egypt. You can read everywhere that the Great Pyramid would have been built in “only” 20 years, really? No wonder why there are so many theories about another advanced civilisation or aliens, popularised by pseudo archaeological books.

Then came an American professor of Natural Sciences of Boston University. He claimed the Yonaguni monument was all natural because the rocks of the islands had the property to break out neatly in such a way to form straight walls and steps. Contrary to Professor Kimura’s work, I couldn’t find any trace online of any academic article but his website where he says nonetheless that the monolith must be 95% natural and then touched up by humans.

Winter is not the best season to scuba dive the Yonaguni Monument because of the winds making it difficult to reach the site. The reason I went so early in the season was to see the hammerhead sharks migrating near Yonaguni every year between January and March. For the first 2 days, with 3 dives a day, my dive buddies of DiveZone Tokyo and I saw a glimpse of a shark at the safety stop of the last dive. Hopefully, we could make a break on the third day with the right conditions to finally explore the Yonaguni underwater ruins on a single dive.

Here is below a drawing representing the main pyramid of the Yonaguni ruins. It comes from the academic article from Professor Kimura’s research. I annotated it with the route (in blue) we took during our dive and the highlights (in red) we saw with Sou Wes dive team. 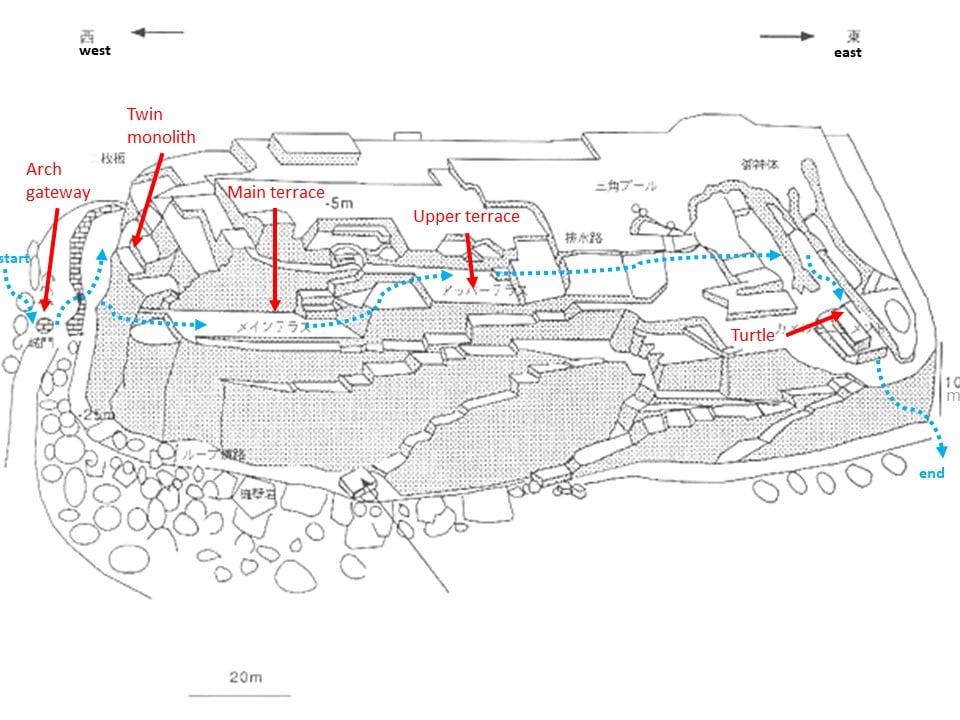 Yonaguni monument depth is surprisingly quite shallow. Yonaguni Monument top terrace is only 5 m below the surface. The bottom of the main pyramid is only at 25 m. Hence, it is no big surprise why it is also a popular spot for free divers.  During my only dive at Yonaguni Monument, I didn’t go deeper than 16,1 m. The currents were so strong near the steps than going any deeper was useless not to say dangerous. Be prepared to hold on the rock or be efficient at fin kicking if you want to take a wide angle shot of the main terrace from a distance. It is important to note that diving in Yonaguni is for experienced divers. Being an advanced diver with at least 100 logged dives is the usual recommendation.

We started by entering the site at the arch gateway. We took a look at the twin monolith before continuing to the main terraces and its iconic giant stairway. There, tremendous currents were waiting for us. You can see on the video above, the speed I am going while filming when approaching this part of the Yonaguni Monument. After ascending to the top terrace, we checked some straight carved canyons that indeed looked like a drainage system. The last spot before making our safety stop was the turtle statue. It was quite a short dive despite many other things to see at the Yonaguni Monument. However, due to the strong currents, we ended our dive after only 37 minutes. At this time of the year, water was at its coldest at 23°C. I was wearing my 7mm wetsuit with a hood which was a comfortable choice.

I arrived with quite strong preconceptions about the Yonaguni Monument, mainly based on my observations of the basalt column reefs I had seen in the Canary Islands.  When I shared some of my dive videos on my Instagram story, I made a poll, and the result was 67% of my followers thought it was natural and 33% man-made. I wasn’t the only one to think this way. I decided to confront my observations with as much reading as I could with the academic papers I could find online (obviously being able to read through Japanese helped).

While exploring the island on land, I noticed the type of rocks along the coast. Indeed, layered sedimentary rocks, mainly sandstone, form impressive rocky peaks such as Tategami Rock or Gunkan Rock (as shown on the pictures above). However, I didn’t see anything of the dimensions of the Yonaguni Monument. What is even more surprising is, once you go underwater, the rocks in the immediate surroundings of the Yonaguni Ruins are all rounds or with soft edges. Of the pictures shown above, the first one was taken before arriving at the Yonaguni Monument and the second one was taken during our safety stop after we left the monument behind.

While it does feel quite unlikely that the Yonaguni monument was built from scratch by men, I agree with the theory of a natural monolith carved by man, and way more than just “touched up”. It would be only one or two random straight lines carved in the rock I would have kept my opinion as it was. However, the accumulation of evidence on such a small surface force even the most scientific minds to admit that nature alone building this doesn’t make sense. It was the common conclusion our dive team came up with.

So after reading the article and watching the video, what is your opinion?

This article was written in partnership with the tourism and convention bureau of Okinawa. As always, all my views and opinions are my own and reflect my experience honestly. 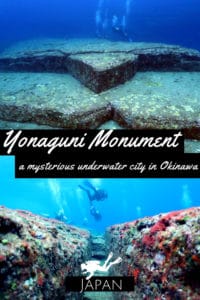