Mermaids are real. I know because I lived with them during the 4 final days of the AIDA Depth World Championships which were held from the 7th to the 14th of September 2019 in Villefranche-sur-Mer, right next to Nice. Villefranche Bay is nicknamed the Bay of Legends due to its history of being the birthplace of apnea competition. AIDA (in French, “Association International Développement Apnée”, International Association for Development of Apnea) was created in  Nice in 1992 by Loïc Leferme and Claude Chapuis, both record men in freediving.

After diving in Nice this summer, I had the unique opportunity to join this exciting event. It was my first media accreditation for a sports competition. I felt a mix of excitement and amazement as I was on the media boat with the other journalists covering the championships. I knew nothing about Freediving competition, and in 4 days, the number of things I learnt was unbelievable. Here the most interesting findings I made. 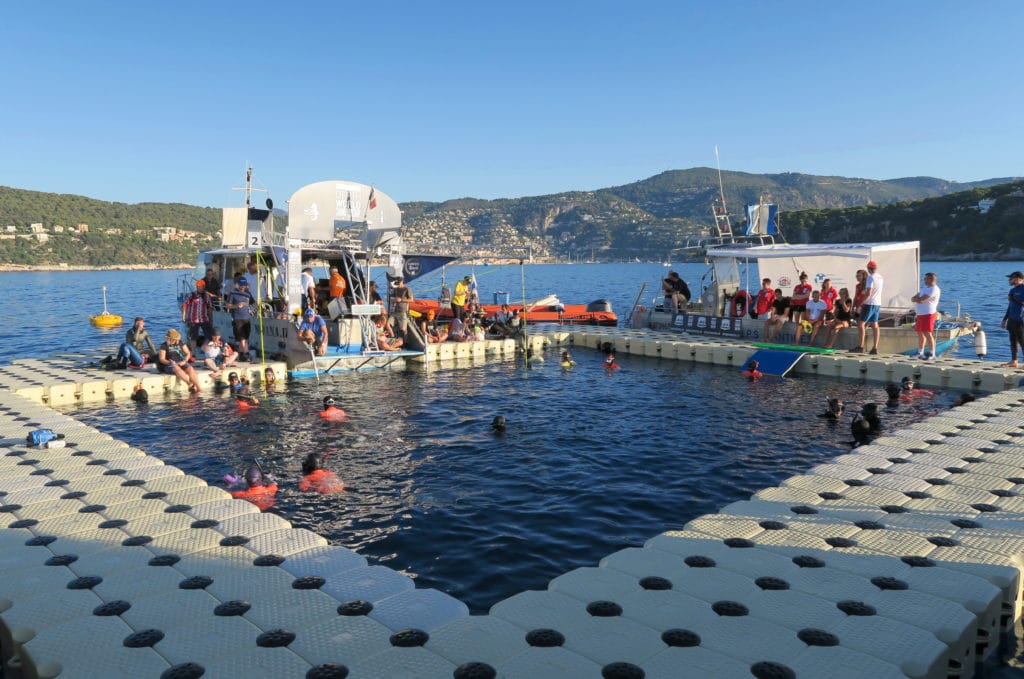 AIDA International is not the only organisation to hold freediving competitions there was another Freediving World Championships this year organised by CMAS (in French – yes, again – “Confederation Mondiale Activités Subaquatiques”, Global Confederation of underwater activities) in Roatan, Honduras, last August. Please note then, all the comments I make in this article are only related to my experience at the AIDA Depth World Championships in Villefranche.

We all have our understanding of what a freediving competition is, influenced by “The Big Blue”, the cult movie of the 1980s of the French director Luc Besson. This movie emphasises on the No-Limit competition using a sled. However, this type of competition has been stopped considering the depths that are now reached by the freediving champions. Using a sled, the Austrian freediver Herbert Nitsch reached a depth of 253 m in 2012!

During the 2019 AIDA Depth World Championships gathering 140 athletes from 47 nations, there were 3 types of competition for both men and women:

However, the most surprising thing was the safety protocol. Once the freediver is back at the surface, it’s not over yet. He has to receive a white card from the judges. To obtain a white card, the diver must, of course, have reached the depth he announced by bringing back a tag, but he must also follow a series of small actions in order: he must take off his nose-clip, his mask, make the OK sign and say out loud “I am OK”. What sounds easy isn’t, it’s not rare to have divers pushing too hard their limits and starting to lose their motor control, in Freediving jargon, it’s called “samba”. In this case, the judge can give a red card. A yellow card is usually given when the freediver turned back before the depth he initially announced.

As you can now understand, because divers announce their depth (secretly) before the day of the competition, there is also a matter of strategy in a freediving competition. You can find the results of the championships on the AIDA website.

Freediving champions are sweethearts on a mission 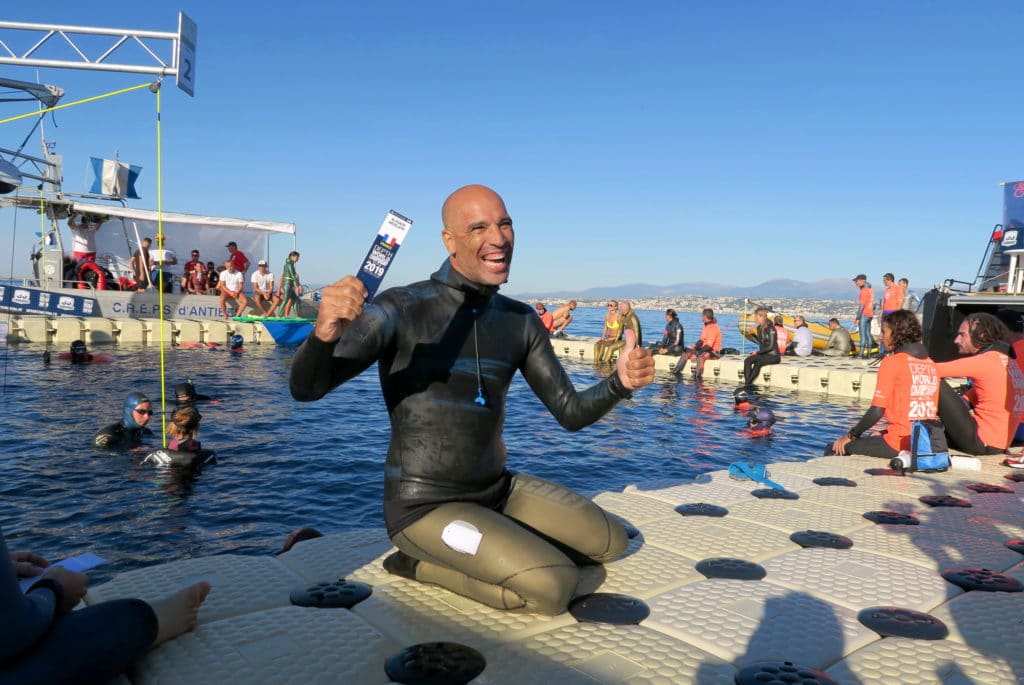 Being an outsider of the freediving community, I was at first impressed and hesitant to interview the champions of the competition. My fears quickly disappeared as I found them open with a smile at each of my interview requests. I had this way the opportunity to interview 3 athletes from the French team Alice Modolo, Arnaud Jerald and Abdelatif Alouach, and the world record man from Russia, Alexey Molchanov.

Alice Modolo was the first one I could interview. She kindly spoke with me for 8 minutes with a big smile not long after reaching 87 m in constant weight with fins. She acknowledged being tired as these world championships came after a busy season including the championships in Roatan where she reached 95 m and made a tentative at 100 m. Although water conditions are much colder in Villefranche she told me “I didn’t doubt I could do it; I kept all the energy I needed for it, I was ready. All I wanted was to come back with a smile and a white card, that’s why I announced a conservative depth”.

When on the media boat, I observed the freedivers during the short moment before they start descending and couldn’t help wondering what was going on in their heads. So I asked Alice. “I am in the moment. I focus on my sensations and my breathing. I knew what I had to do; I did it before, I knew I could do it and that they were no reason not to be able to do it”. For sure, Freediving champions train all year long, and their performance cannot be left to chance.

Alice was also a scuba diver first before starting freediving. Here is her piece of advice if you are hesitating to try: “Give it a go and feel the sensation of diving without tank and regulator. Apnea is all about putting simplicity back in the way we move underwater.”

I met Abdelatif Alouach, right after his performance of 110 m in constant weight with fins which gave him a bronze medal behind Alexey Molchanov (130 m) and Arnaud Jerald (115 m). “It’s complicated what we are asking from our bodies, but I take as much pleasure at -110 m than at -30 m.” Abdelatif only started competitive freediving 2 years ago, and he’s already collecting medals at 42 years old. “It’s a dream come true. I changed my life and left my job for it” Right after telling this, the emotion was too strong, and he walked away crying and jumped into the water.

The Russian freediver Alexey Molchanov is not the world champion for nothing. You see him laughing after a few moments of meditation before going in the water. Right after he came back from his second validated attempt at -130 m, you cannot see a single trace of faint on his face. So I asked him what his secret was, how he was dealing with the colder conditions in Villefranche, and if he had any plan to go any deeper.

“The secret is that I train for this for many years. Freediving is a matter of adaptation, and you can’t go with big steps. I actually like the colder water below the thermocline, because you need to be more focus, you can’t just relax, you need to make an effort to relax. After 20 to 30 m when the free-fall starts, when I make no move and sink, I make an effort to check my body to be sure I have no tension, I think it makes my focus even better.

I need to test my psychological strength to challenge my limits on the next competitions, but I will only do it with small steps. My next target is 131 m. It’s not only about breath-holding but also about oxygen narcosis or pressure.” 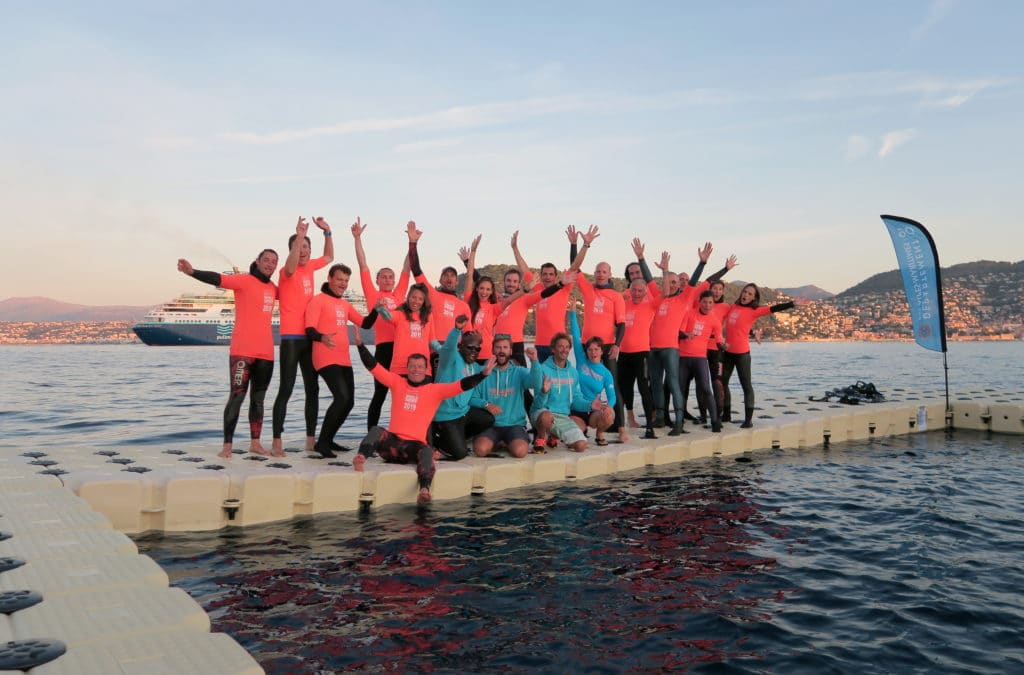 The real stars of this competition were actually to me the safety freedivers. I couldn’t believe how many time by teams of 4 they dived down to 30 m on a single breath to check if the athlete was ok or be there if anything happened. And many things happened during the competition.

The number of freedivers subject to blackouts during the championships was apparently a sad record in itself. During the Women constant weight with fins competition, I saw the Japanese freediver, Hanako Hirose, collapsing after being awarding a white card, placed on oxygen therapy and finally sent to Nice hospital. This case, in particular, sparked a massive controversy with phases of disqualification and requalification until the end of the championships where she was subsequently awarded the gold medal.

On my last day of the competition, I decided to follow the team of the Freediving safety Academy led by Pierre Frolla, a former freediving champion, who is now managing a freediving and scuba diving centre in Monaco. I asked him what was going on, and he spelt it out.

“We hired 30 freedivers and trained them for 3 months while building together a process. What was innovative this year with the Freediving Safety Academy was to bring an academic methodology, homogenously applied by each safety freediver compared to past competitions where things were left to personal feeling.

There is nothing more important to me than the safety of the athletes and the image we give to the global community of competitive freediving. The image AIDA currently gives terrifies me. I have a freediving school where I welcome 3,000 children each year, and I’m ashamed to face parents who may ask – is it really what you are teaching our kids?

We can’t blame the athletes. Their job is to descend to the bottom of the sea and win. The only thing that can protect them is strict rules because they inevitably play with the limits.

We prepared ourselves, we were ready to intervene, we expected some accidents, of course, it’s competitive apnea after all, but not as many and not this type of accidents. An athlete who had an accident the day before can’t be accepted to compete. Rules say as long as your airways are out of the water, you can get a white card, even if you faint afterwards, and become world champion. It’s not like for a marathon and runners who fall because of hypoglycaemia; it’s freediving and potential risks of pulmonary œdema or even hemiplegia. I’m not saying to stop competitions; I’m saying we need to change the rules”

It seems Athletes themselves support the idea:

“We need to show a beautiful image of our sport. Sambas, blackouts, this is not competitive freediving. One needs to be reasonable and aim to come back with a smile!” Arnaud Jerald, silver medal in constant weight with fins this year. 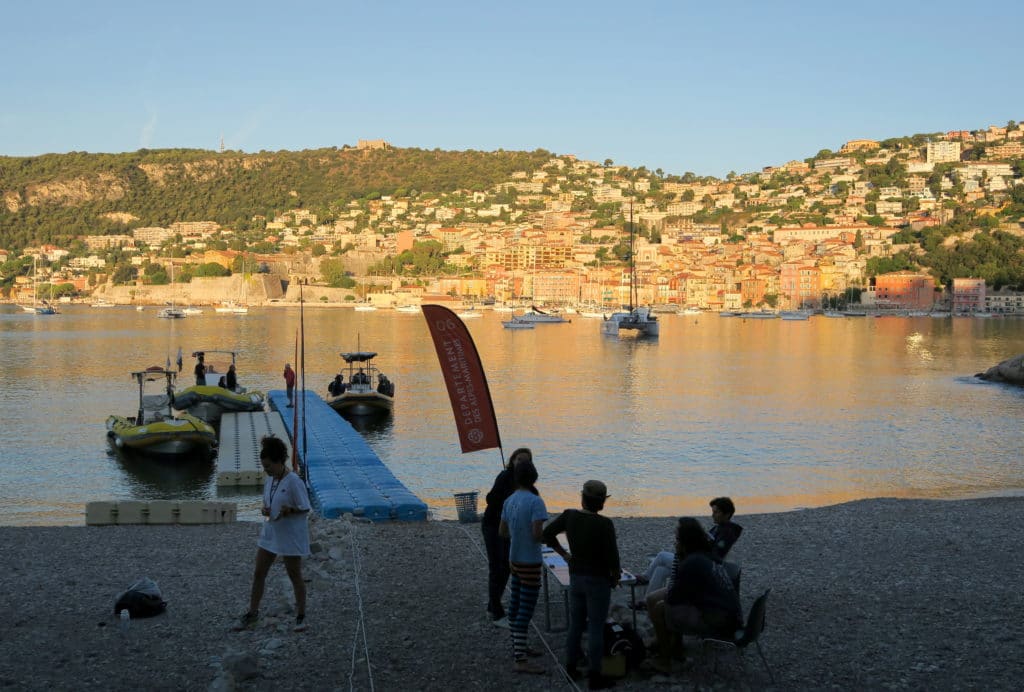 I am now at cross-roads in my practice of scuba diving with my underwater photography passion. I can dive deeper with tech diving and rebreather or go the freediving way to make the most of diving trips, including encounters with big animals like cetaceans. Despite the controversy during the competition, some calling happened. These freediving championships inspired me. I don’t want to go for the world record, but if I could learn how to stay at 20 m for even a minute and a half that could change everything for me. To be followed…

This article was written in partnership with the tourism board of Côte d’Azur. As always, all my views and opinions are my own and reflect my experience honestly.