Since my archaeological surprises in Turkey, I should say I developed a keen interested in finding new destinations with archaeological diving experience. While doing some research, I quickly spotted Alexandria in Egypt and Pozzuoli in Italy. While Alexandria requires specific authorizations, just before moving to Scotland, I decided, in less than a week, thanks to a reward ticket with my miles, to go to Naples in Italy. The goal? Explore the underwater archaeological park of Baia, an ancient sunken city which is the underwater version of Pompeii, located only a few kilometres away.

The bay of Naples is in South Italy and nestled within it a group of charming islands: Procida, Ischia, and Capri. From Baia to Sorrento, expect high-density urbanisation mixed with Roman ruins and Renaissance historical buildings. Everything can seem a bit chaotic, but an unplanned mix of old and new along with the strong local culture give Naples a vibrant atmosphere. Everyone in town agreed to say Naples was not Italy, “too different”, even young people speak Neapolitan among themselves. Naples was under Spanish reign from 1504 to 1714, so it is no wonder why it almost sounded Spanish to me, and why with my mix of French and Spanish without speaking much of Italian I could sort myself out of any situation.

Naples is worldwide famous for its nearby ruins of Pompei and its fascinating archaeological museum. My first and only visit to Pompeii dated back to when I was a high school student as I was studying Latin ( I guess it had at least this advantage). I loved it but this time I decided to spend more time strolling through the narrow streets of Naples’ historic centre, from cafés to grocery stores, from museums to churches. The number of churches and cathedrals amazed me and I attended two processions of local saints within a week. Without a doubt, the Catholic faith is strong and alive in Naples.

Neapolitan Pizza, Mamma Mia! I thought I had already eaten a good pizza before…. I was wrong! The taste of the simple recipe of Neapolitan pizza with only tomato, basil, and mozzarella, freshly baked in a wood oven and eaten from the box in the street on the roof of a car, taking a quarter that you fold into 2 to make a sandwich out of it…. yummy, crusty but soft inside, incredible flavours of fresh tomato sauce… I think I could keep writing about it! Besides, there were so much more to try: seafood in Pozzuoli, limoncello in Sorrento, and mozzarella di buffala of the Campania countryside… Italian gastronomy is poetry to me.

I spent hours in the archaeological museum of Naples, mesmerised by the refined mosaics, statues and mural paintings of people who lived thousands of years ago. If you like Roman history, plan at least 3 hours to visit the 12,000 m² of the museum. The price is 15 € but there are several days in the year when entrance is free. You will find all the information on the official website of the museum.

I mostly used public transport during the week I stayed there. Very convenient, the two main lines take you on each side of the bay. The Circumflegrea goes to Baia from Montesanto station, and the Circumvesuviana goes to Sorrento from Garibaldi station. In 20 to 60 minutes, you can be anywhere you want. Often, people would help me lifting my scuba diving bag in the trains which have high steps to climb. To go scuba diving in Pozzuoli, you need to stop at Arco Felice station on the Circumflegra line. If you get off one stop before at Pozzuoli station, head to the harbour and hop on a ferry to Procida Island. The town, the colourful houses and the views will catch your breath away. It was by far my favourite spot in the Bay of Naples.

The Phlegrean fields and the Bradyseism phenomenon

While most tourists rush to take the east train to the busy site of Pompeii, scuba divers take the west train to explore a sunken Roman city only accessible to them. From Pozzuoli, 5 to 10 m below the surface lies another incredible testimony of the wonders of the Roman era in Naples: Il Parco Archeologico Sommerso di Baia / the Archaeological Underwater Park of Baia. But for what reason was this ancient luxury resort of villas and thermae, loved by Caesar and Nero, submerged by the sea while Pompeii was buried in the ashes of the Vesuvio and Herculaneum swallowed by mud?

A unique phenomenon occurs in this area called “Campi Flegrei“: the bradyseism. Unlike an earthquake which makes the Earth move horizontally, bradyseism makes the ground move vertically, up or down. And this is how this Roman compound went underwater. But it seems that today a reversed phenomenon has been observed so that the ruins could be above water one day!

The Underwater Archaeological Park of Baia: an underwater Pompeii

Without a doubt, the Underwater Archeological Park of Baia is one of the best dive sites in Europe. The two most eye-catching sites are Ninfeo di Claudio and Villa a Protiro. Secca delle fumose has a different interest: it is a kind of natural jacuzzi of sulfuric gas, showing the volcanic activity of the area. This dive was unfortunately not scheduled during my visit to Pozzuoli.

Ninfeo di Claudio was my first dive in the park whereas my target was Villa Protiro. I was lucky to meet a friendly group of scuba divers from Milan who warmly recommended me to join them for this dive. This magical spot gathers not less than the “triclinium-nymphaeum” (a kind of relaxation room) of Emperor Claudius, the 200 m long  “Via Herculana” paved road and “thermae” Roman baths.

In the nymphaeum, you can admire beautiful Roman statues underwater. Unfortunately, these statues are not the original ones. They are copies of the ones found in 1969, 10 years after the first discovery of the nymphaeum. The original ones are now protected in the archaeological museum of the Castle of Baia. Nature has been quick to integrate them as an artificial reef. Covered by seaweed, they are now the shelters of small cuttlefish. The statues represent the Cyclops of Homer’s Odyssey and some are a benediction by the goddess Minerva to Claudius’ accession to the throne.

In the Roman baths, you can easily navigate through the different rooms as the foundations of most walls are still visible. If you pay attention, you may be able to see remains of potteries. A bit further, I saw our guide removing sand from an area to reveal marble floor and mosaics, and then carefully replacing the after we could all see it. I understood that the park’s location, near to the shore, meant these treasures needed to be protected from some careless visitors.

Villa a Protiro is clearly the highlight of the underwater park of Baia. Although I had moved on the other side of Naples Bay, I came back one morning to Pozzuoli just to make sure I could make that dive. The 1h30 train journey was totally worth it. The villa had a courtyard with a large black and white geometrical mosaic floor. This mosaic is in perfect condition, and this time, this is not a copy! Our guide spent a few minutes gently pushing away the sand to reveal it. The conditions of diving were not the best that day, but I am sure that on a beautiful day with very clear water, it would be worth spending an entire dive to clear it fully to take wonderful underwater pictures of it.

If you want to enjoy some more diving in the area, the islands of Procida and Ischia have beautifull volcanic walls to dive. I had the opportunity to dive a site called La Corricella, with a stunning view of Procida just before jumping in the water. A cuttlefish tagged along at the beginning of the dive and then we followed deep walls covered in sponges and red gorgonians. If you want to live the same adventure, contact Centro Sub Campi Flegrei in Pozzuoli!

Where to stay in Pozzuoli or Naples?

During the first part of my trip, I stayed in Pozzuoli, at the hotel recommended by the dive centre: Hotel La Tripergola. The decoration was a bit old-fashioned but I liked it this way, it felt homey! My bedroom was huge, and this view of the sea was everything I was looking for! You have to know that Pozzuoli in the evening is super quiet so if you’re looking to party, it might be better for you to find something in Naples. In my case, it was just before moving to Scotland, so I needed some rest on the first days of my trip. I enjoyed the excellent seafood and pasta at the hotel’s restaurant and good night sleep. I loved that the hotel was only 5 minutes walking away from the dive centre so I could sleep a bit more in the morning!

The last two days of my stay, I went to the eastern suburbs of Naples, to Portici, a small charming port away from the tourist activity of Naples Bay. I stayed with an Italian Couchsurfing host who shared with me his best veggie recipes and validated my recipe for mushroom risotto after visiting together Sorrento. 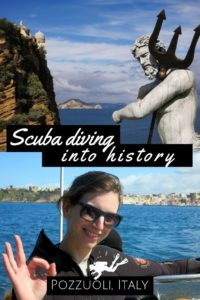