When I started scuba diving, I quickly heard about “The Blue Hole”. My first reaction “Ooh I have to go diving there!”. After some research, I realised there was more than one. So why the Great Blue Hole is so famous? From a tourism marketing point of view, this is an excellent brand but does it keep its promises? What can you expect to see?

What is a blue hole?

A blue hole is a kind of submarine cave, usually in the shape of a vertical tunnel, this is the depth of the tunnel that gives this deep blue colour.

Often, blue holes used to be limestone caves during the last ice age when the sea levels were lower, but when the water rose again, the top of the cave collapsed. As the water flooded the hole, it formed these cavities with an amazing deep blue colour.

The most famous blue holes in the world

The deepest blue hole in the World, at -202 m, is Dean’s Blue Hole, in the Bahamas, a famous spot for freedivers. In the bar chart below you see the different depth of the most famous Blue Holes in the World which go from 60 m to 202 m deep. The great blue hole of Belize is the 2nd deepest but is the largest by its diameter size of 300 m. Dean’s blue hole has only a diameter of 30 m.

You will find on the map below these famous blue holes. With the satellite view and by zooming in, you can actually see these blue holes in Belize, Bahamas and Egypt!

Update 2020: On a side note, the Blue Hole seems to be a good marketing argument since the name is mistakenly used for other sites around the world. For instance, during my travels, I saw the term used for the Modra Spilja in Croatia or these river pools in Vanuatu.

Make sure to include some time to discover Belize inland side before going diving in the Great Blue Hole. While being relatively unknown, this country was an excellent surprise. The 290 km long territory south of Mexico and, east and north of Guatemala, gathers no less than 4 quite different communities, making it an incredible patchwork of cultures.

Being a Commonwealth country, it is the only country in Central America where English is the official language, but besides this fact (and the Queen being on all the notes), in Belize, you will meet the Afro-Caribbean community, the Latin-Mayan community, the Chinese community and the last but not the least the Mennonites originally from Germany (a community similar to the Amish in Pennsylvania in the USA).

Explore the country beyond the chaotic Belize City, the economic capital; take a “chicken bus” for a couple of dollars, in the direction of Belmopan, its administrative capital, and then head to San Ignacio near the border of Guatemala for lush jungles and amazing wildlife including jaguars and toucans.

To go scuba diving in the coral reef of Belize, take the speed boat in Belize City to Caye Caulker. It is both the cheapest place to stay in the Cayes and the best place to enjoy the chilled-out Caribbean lifestyle when you are a scuba diver. From there, you can go diving in the pristine waters of the Hol Chan Marine Park, Turneffe Atoll and Lighthouse Reef.

Discovered by Jacques Cousteau in 1971, the Great Blue Hole in Belize measures 305 m across and 123 m deep; it is almost perfectly circular. Located in Lighthouse Reef Atoll, it is more than 114 km away from Caye Caulker.

The most interesting part starts at around 30 m where there is an incredible limestone cavern with giant stalactites. Few get to see what they look like as not every diver is qualified to go deeper than 18m, and even fewer are qualified to go down to 40 m (deep diving specialty is necessary in this case) although many flout the rules. Remember, safety first, and remain within the limits of your training, according to your diving insurance rules.

To go to the Great Blue Hole, it was a two-hour journey on a small boat in choppy waters, and it was a very bumpy ride. But it was worth it. The boat arrived at the Great Blue Hole at about 8.00 am (yes, it was an early start at 5.30 am). Because of the circular reef around, the seas are not so rough so entering the water was no problem.

Our first dive at the Great Blue Hole is a unique geological feature and quite a spectacular dive. After entering we descended straight to 40m. From there we could see the stalactite formations that make this dive so special. The area is known for marine life too, in particular, the reef sharks, which could be seen circling the waters around us. At 25 minutes the dive is short (because of the depth), and this disappoints some divers, but it is definitely 25 minutes well spent!

The second dive of the day was at a site named Half Moon Wall, which on any normal dive expedition would be a highlight. It’s home to garden eels, spotted eagle rays, barracuda, turtles and all sorts of other marine creatures.

Between the second and third dives, we had some surface time – and some lunch – on Half Moon Caye, a natural monument in Belize and a UNESCO world heritage site. It is home to the red-footed booby.

Our final dive of the day was spent at the Lion’s Den, which was a fine dive in itself. Again, the marine life is beautiful and, even after the two spectacular dives of the morning, is not to be underestimated as a dive site.

As a conclusion, we really think going diving to the Great Blue Hole is worth the price, whether it is for its unique geological formations, its special blue light or the thrill of an exciting deep dive. The Belize Great Blue Hole deserves its place on my list of the best diving in the Americas & the Caribbean.

This article has been co-written with my fellow World Adventure Diver Glyn from the UK, living in Belgium and who has joined me on many of my adventures. He explored Belize for the first time this November 2014 after my trip to Belize in December 2010. We wanted to cross our experiences to share with you the best article as possible.

If you enjoyed this post, subscribe to WAD Newsletter to receive the latest posts directly to your inbox. 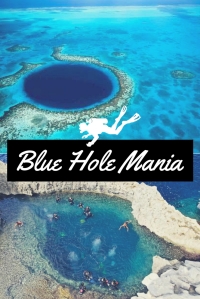 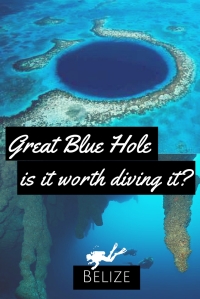