It was part of the deal: I moved from Paris to Scotland to finally live surrounded by the sea and go as often as possible scuba diving in Scotland. Of course, the water is not really at a tropical temperature but since I am a dry suit diver, what is the problem? Yet, after 10 months in my new country, I have to admit it… I have dived in Scotland only twice. Nothing to see? Nowhere to go? No, it was indeed the opposite. To reach the underwater treasures of Scotland, the thing I needed to learn was that knowledge, networking and preparation are necessary.

Scotland, a dreamland for explorers

An inspiring land for many travellers, Scotland is an ideal destination for road trips. In only a couple of hours driving from Edinburgh, its beautiful and mysterious capital, you will pass colourful lochs and glens (lakes and valleys), ancient castles and abbeys, wild forests and cliffs. Nonetheless, to see the most breathtaking landscapes of Scotland,  thinking you just need to drive north won’t be enough.

I agree that any loch surrounded by a forest, with a ruin on an island in the centre, has incredible charm. But with some research, I finally discovered what the Highlands were about when I drove from Loch Ness to the Island of Skye, and from Glencoe to the Trossachs. Most of the time, I was so hypnotised with what I saw that I forgot to look for a place to park the car and take pictures.

A long process to build a network of local divers

With 9,910 km of coastline, I was sure I would at least find a couple of interesting scuba diving sites in Scotland. With my first research, I found that a few dive sites were accessible with a reasonable car ride from Edinburgh. Unfortunately, my dreams of diving almost every weekend faded away after 3 months. Of course, first and foremost, I needed time to settle in my new country. Then I have faced issues with rental drysuits. Finally, the thing I was not expecting at all was to struggle to book diving anywhere, anytime as a solo diver.

Like most cold European countries, scuba diving has been for a long time something you would do in a club, training in a pool or in local sites to pass your Open Water, and then be ready to dive in warmer exotic locations.  It is only very recently that tourism related to cold water diving really took off. Scuba divers from all over the world are attracted by the adventure of diving on historical shipwrecks, with extraordinary animals or just the technical level required for cold water diving.

With only 4 PADI dive centres, none from SSI or other equivalent private agency, BSAC and SSAC clubs are still the majority in Scotland. These clubs usually book their spots on the different available boats around Scotland up to 1 year in advance. Last summer, I never managed to dive the Sound of Mull in West Scotland as everything was fully booked. I was hoping for a last-minute cancellation. It never happened. My luck came from 2 of the PADI dive centres who kindly took me on board.

Many people asked me “Why don’t you join a club, then?” I don’t want to sound too demanding but the idea of diving only for training in a pool or a random lake was not very exciting. My ideal scuba diving trip is still independently run, without having to subscribe to the National Federation and pay the club fees for only 2 potentially interesting trips in Scotland per year. I decided there should be some other solutions to make it happen.

It is finally by networking online on scuba diving forums and through the event section of Facebook, I could spot people organising trips independently. Bingo! And this is how I met Ace divers who organise scuba diving tours in Scotland.

Where to go diving in Scotland and what to see?

My 2 first experiences of scuba diving in Oban and in the Firth of Forth confirmed it: scuba diving in Scotland is definitely worth the trip. Deep walls and rocky reefs covered with yellow antlers sponge, Devonshire cup coral, plumose anemone and ‘dead man’s fingers’.

Regarding animal encounters, it’s been quite small but has included velvet swimming crabs, long-legged spider crabs, squat lobsters, rock pool shrimps, sea urchins, sea stars, sun stars and many feather stars. During the surface interval in the Firth of Lorne, I was lucky to see my first porpoise (a type of small dolphin) swimming near the boat.

Actually, there is much more to see. I just need to go diving more often and to get lucky. Seals, dolphins, whales and the famous basking sharks are among the marine highlights of Scotland.

Besides, Scotland is internationally recognised as one of the best places in the world for wreck diving. Coldwater has the benefit of conserving historic shipwrecks quite well. Scuba divers from all over the world head to the Orkney Islands to get the chance to dive on WWI shipwrecks in a site known as Scapa Flow.

My bucket-list of the best diving in Scotland

Update: After living for two years in Scotland, I wrote a blog post about my favourite itinerary through the highlands linking some of the best shore diving in Scotland.

If you enjoyed this post, subscribe to WAD Newsletter to receive the latest posts directly in your inbox. 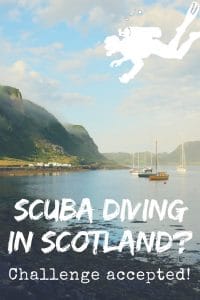